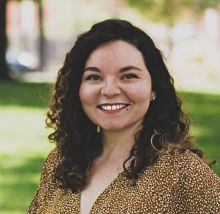 Sara Wetter is a graduate student in the Clinical and Health Psychology program (Pediatric Psychology track). She graduated from Anderson University in 2016 with a B.A. in Psychology and minor in Family Science. She then earned a M.A in Clinical Psychology from the University of Dayton, graduating in 2018.  After graduation, she worked as a clinical research coordinator for two years under the supervision of Dr. Avani Modi at Cincinnati Children’s Hospital Medical Center’s Center for Adherence and Self-Management. In this role, she helped to launch two NIH-funded multi-site clinical trials aimed at improving medication adherence in children and adolescents with epilepsy. Sara joined Dr. Kimberly Driscoll’s lab in Fall 2020.

Sara’s research interests include the impact of pain on various outcomes across pediatric conditions, family dynamics, and how those factors specifically affect chronically ill children from under-served backgrounds and their families.