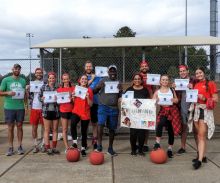 Over 50 players, officials and fans came out for the second ever CHP Kickball event.  This is becoming the hottest ticket in town as we had 3 teams compete.  We had perfect weather and lots of laughs punctuated by random athletic plays and strategy consistent with the high GREs of our trainees.  A special thanks to Dr. Wiens for making her umpiring debut.  Once she got that whole safe vs. out signaling thing worked out, she was as steady as a rock J The photographs below are courtesy of the talented Dr. Waxenberg.

Captain Fedele led the way with great coaching, timely catches and recruited a strong team.  Joshua Owens, Alex Clement and Ryan McCarty displayed range and speed in the field.  Former track stars Laura Jones and Shellie Anne Levy were a blur running the bases.   The team pulled out a last inning 2-1 win in the championship game.