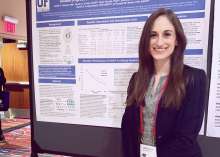 Leslie Gaynor presented the winning talk at the Institute for Living in Retirement’s Robert Levitt Awards for Student Research on Aging competition on March 15, 2019. The title of her talk was, “Identifying Cognitive Predictors of Amyloid Positivity via Comparisons of Amyloid Positive Mild Cognitive Impairment and Healthy Aging”. Her research demonstrated the effectiveness of two new tests of very early cognitive change to noninvasively detect brain performance changes coincident with the development of amyloid deposition in the brain, a risk factor for Alzheimer’s disease. These tests were developed within the 1Florida ADRC as part of a study led by David Loewenstein, Ph.D., ABPP (University of Miami) and Russell M. Bauer, Ph.D., ABPP (University of Florida). These results are also under review for publication in a peer-reviewed scientific journal.