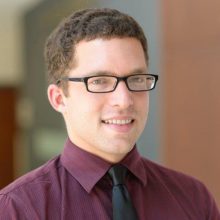 Dr. Jacob Jones, a 2016 CHP graduate, is the recipient of the Society for Clinical Neuropsychology (Division 40, APA) Early Career Pilot Award.  His project, entitled “The gut-brain axis in Parkinson’s disease:  Influences of microbiota on cognition and white matter”, is based on observations that early signs of PD pathology (alpha synuclein / Lewy body aggregates) are detected in the GI tract years before motor symptoms manifest. He will be testing the novel hypothesis that microbiota abundance (particularly in taxa associated with immune responses) will be associated with cognitive impairment and decreased white matter integrity in individuals with PD.