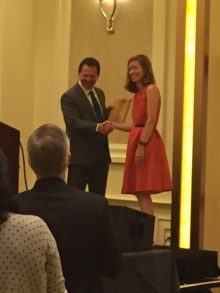 Each year, the American Academy of Clinical Neuropsychology (AACN) recognizes the contributions of one AACN member with the Distinguished Neuropsychologist Award. This award honors members who have made a distinguished contribution to the Academy (AACN) and/or Board (ABCN), as well as to the greater field of Neuropsychology through their teaching, research, clinical, and/or leadership efforts, and who have also shown their commitment through their exemplary services to the AACN organization and the profession.

The 2016 recipient of the AACN Distinguished Neuropsychologist Award is Dr. Glenn Smith!

Dr. Smith has contributed to the field of neuropsychology in every possible manner including his service, scholarly publications, clinical practice, and training.

Dr. Smith received both his Bachelor of Arts and Doctoral degrees from the University of Nebraska, Lincoln. He completed his internship in clinical psychology at the University of California, Los Angeles Neuropsychiatric Institute with a focus on neuropsychology and geropsychology, and completed his post-doctoral fellowship in Neuropsychology at the Mayo Clinic. During his career he has been awarded member status in the Sigma Xi Scientific Research Society and achieved Fellow status with the American Psychological Association in 2006.

Dr. Smith spent the first 25 years of his career as a consultant at the Mayo Clinic, Rochester where he has established himself as a national leader in research and clinical work in both neuropsychology and the field of dementia. This includes his co-publication with Dr. Mark Bondi, Mild Cognitive Impairment and Dementia, for the AACN Oxford Workshop Book Series.

In 2015, Dr. Smith joined the University of Florida as the Chair and Elizabeth Faulk Endowed Professor for the Department of Clinical and Health Psychology. He has mentored 32 research fellows in his career, the majority of whom have gone on to have productive research careers. Finally, Dr. Smith has served the neuropsychology community by serving as President, Vice-President and examiner for the American Board of Clinical Neuropsychology (ABCN), and Chair of the Clinical Neuropsychology Synarchy. He has served as member on the Scientific Advisory Committee for APA Division 40 and was Scientific Program Chair as well.

Clearly, Dr. Smith is well deserving of this honor. I wish to thank all the members of the AACN Distinguished Neuropsychologist Award Committee (Co-Chairs:  Kira Armstrong and Ted Peck), for their time, effort, and energy in this selection process.

Following tradition, Dr. Smith will be formally honored at the annual AACN Conference this June in Chicago.